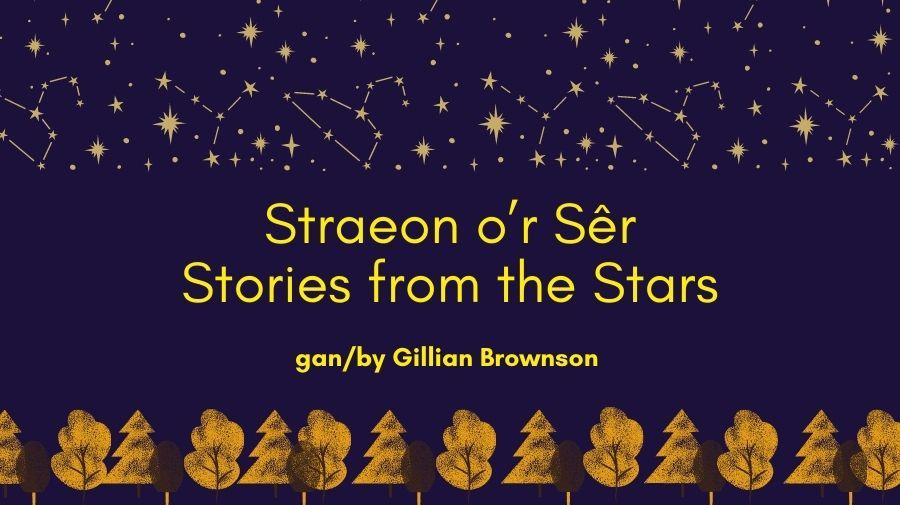 Stories from the Stars

The sky at night is a storybook, full of Myths and Legends.

Join Writer & Storyteller Gillian Brownson as she explores these stories from the stars, some from Wales and some from further a field, but all captivating as they twinkle above in the night sky.

The Welsh Myths, with Welsh dialogue/songs:

This story, originally found in the Mabinogion, takes us into the otherworldly Annwn, as we follow two men’s battle for the hand of the beautiful Creiddylad, the lady in red. The two men fight still in the night sky when Gemini is visible.

Run Time: 12 minutes | Monsters Themes | Death Themes | Origin: Wales  The origins of the characters in this story are associated with the ancient Book of Taliesin, though the story itself originated much later. It  tells of how the people of the Conwy Valley defeated the troublesome Afanc with Hu Gadarn’s mighty Oxen, one of which can be seen still in the Taurus Constellation.

The International Myths are:

Suitable for families with children age 7+  | Story told in English

Originating in Greece, this story is one of the most famous of greek legends depicted in the night sky. Containing some of Greek mythology’s most iconic characters, join Perseus as he seeks to rescue Andromeda from a great Sea Monster.

Suitable for families with children age 7+  | Story Told in English

Originally told in the Native American villages along the Oswego river, this story follows the pursuit of the illusive and troublesome Great Bear, whose hunters can still be seen chasing him through the Big Dipper constellation.